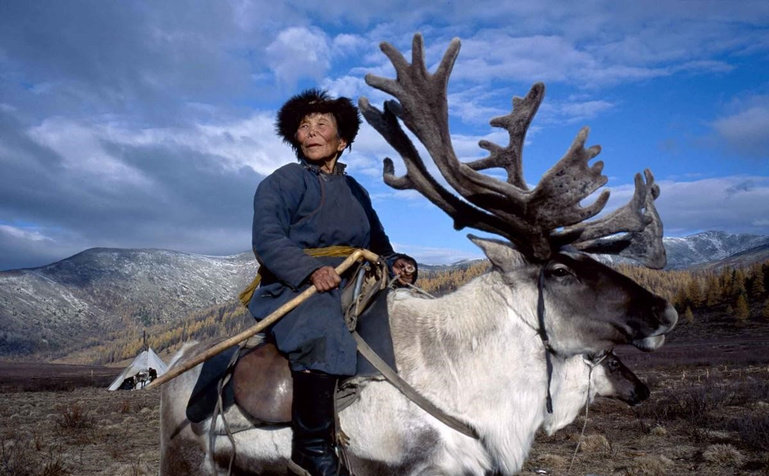 Tsaatan’s taiga life is both cold and warm

The sound you hear when you stroll around a field cradled among the towering peaks of mountains. The sound like that of squeezing an empty bottle hard, the like that puts you into sleep. It’s the sound of thick snow getting ironed by your feet and if you by any chance know about this place where they grew up, you well know that snow is thick and regular. Here indigenous, Mongolian people live wearing traditional ‘deel’ made by the skin of reindeers or squirrels whose abundance stands overtop its days of snow. This place, where Siberian cold meets the Khuvsgul prrovince, have citizens who are true custodians of their nature, tradition, and identity.

Give them television and they will look hard at it before realizing how worthless this whole black box will be in their environment. They are not like us; they are well-versed with nature and see the world as one element that embodies everything. One common disparity between taiga people and city-dwellers is their input to their daily schedule. They sustain using everything nature gives to them. Mongolians are spiritual but you will see more of it in the taiga where every tall mountain are believed to be imbibed by a spiritual force one yet to understand fully.

Reindeer milk is widely used for its rich nutrition and like the rest of nomads settling in Mongolia, dairy there is used commonly, and more versatile. We make dried curds, yoghurt, kumis, and many others by using only milk. It’s the essential source of protein and vitamin – a staple that must never be separated from Mongolian culture.

With these dairy foods enriching their daily lives, taiga people are sturdy and powerhouses against the cold. It’s common bewilderment for outsiders to be surprised at the sight of taiga people comfortably living in this bone-biting cold. But unlike others, they are used to this better than we are. It is simply how they live – without reasons to look down and scratch phone screens like we usually do.

For them, tomorrow will likely resemble what happened today and there is a certain spark of joy in that routine. Mornings start to milk reindeers after it’s finished, reindeers are released from their ropes early morning and carry on being a helpful animal like they have been for the last many centuries. Nomadic people – they are not the biggest fans of solitude. Every now and then, they visit neighbors to catch up or just for simple hangouts. One Tsaatan – taiga person’s concern will be shared in the wide web of taiga dwellers. Some may call this a brotherhood and some as a friendly gesture, but for Mongolians, it is a law deep ingrained in their blood.

There is so much more that goes around preparing the taiga dwellers against facing the monotonous routine and the cold. You should never underestimate the workload of their daily lives. Everything that they wear, eat, lie has all been crafted and done by their hands. One thing that requires sharp concentration and comprehensive preparation is the making of ‘deel’. The deel is the traditional outer wearing that overcomes the harsh weather of all four seasons. Using the skin and fur of reindeers, deel can be extra warm for taiga people. It’s what sets them apart from other group of nomads. The versatility of deel can go beyond just wearing them, but it can be used as a sheet, cover, or maybe even an umbrella for its expanding size. This is especially conducive to nomadic lifestyle. The hallmark of this particular life way is constant migration. Less clothes means less burden in transitioning from one place to another.

The sky looks blue as ever and it introduces new light to a place where life is moved forward by the strength and agility of reindeers. Their capability of carrying 60-70 kilograms of load on their backs does little impression on the taiga dwellers, but a more surprised emotion for outsiders. It’s a common sight for travelers to travel purposefully all the way to the bounds of Khuvsgul lake to witness such demanding lifestyle.

But forget not about how sufficiently civilized they are in their habitat. High schools are already erected in their local destination, and students are gradually increasing in size. As kids socially and emotionally mature up, taiga high schoolers have made reindeer skin deel hard to swallow for their bulky size.  The new trends are now silk and fabric for their comfort and quality. But honestly, they don’t care about the social hierarchy born from how glamorous the clothes are seen on the outside.

This is the life of certain individuals – waking up to face the chilly breeze and having the close companionship with animals. It’s the life that unites both human and nature back to one point where it was all born in the first place. It is the creation of nature. Nothing here is littered or trashed for no reason. Everything is sustainable, even the utensils they are using for picking up food. For them, hurting mother nature is tantamount to flaying their body. It is considered as one – both the nature and the human. Nothing can separate them and it is this life they were all wholeheartedly chosen. No regrets, and no sad chapters. Tomorrow will be similar of today, but a little more colder on the outside and a little more happier inside.