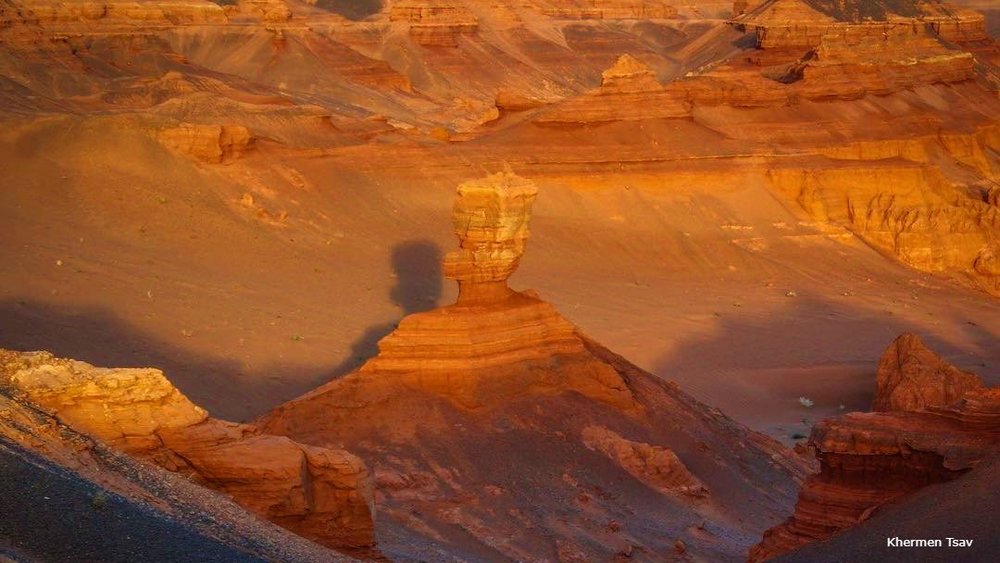 When crossing wide sand and scrub-covered valley, then stony plain, the base of a spectacular and heavily eroded line of red-coloured cliffs with coal-black and grey swirls of pebbles down by fierce Gobi winds. It is the southwestern end of the South Gobi, red sandstone world of monumental proportions – the valley of more buttes 2500 km squire land stays 1000m above sea level. On the left, cliff faces like modern balconied apartment blocks rose sharply above 100-200m high, along with solitary buttes. When we drive further, inside buttes dry creek beds, red sand dunes and saxual bushes. Its southern wall a couple of kilometres away there is a wind and water-eroded string of isolated cliffs.

Wide-sloping fans spread down from the plateau above. There is oasis further in Hermen tsav. There are a wolf, wild ass, the Gobi’s lizards, fox, gazelle and ibex. Same as other Mongolian Gobi, this was a homeland of dinosaurs, crocodile and the other sea animals. The especial is from here the entire, full skeletons are found.

It is as in a fairy tale place, buttes as tall apartments, wide streets, grassy garden and dinosaur’s bones littering on the grand. Some might be a little bit afraid because of emptiness and remoteness. But nothing to worry, our experienced drivers and Sharing-steppe team arrange travel safely. In summer July and August sometimes it reaches 50 to 60 degree hot on the grand. On the way, we go across Zulganai oasis.