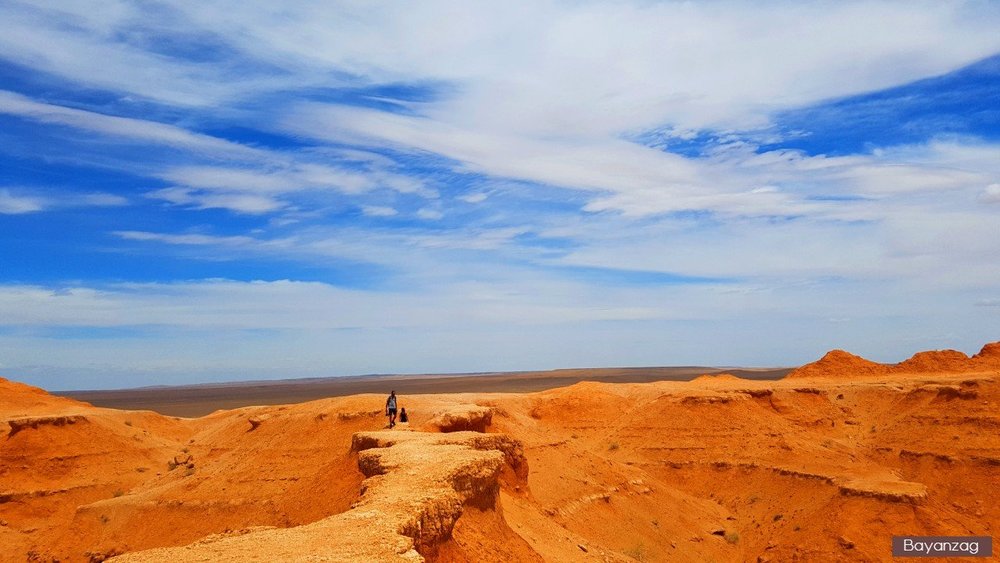 The vast, steep cliffs appear in a flat desert steppe. Its bright orange colour and the way they burned deeply in the sun in the sunset, it owned the name of Flaming Cliffs. Walking through cliffs gives you the feeling of silence in the middle of nowhere.  The landscape above is almost totally flat desert steppe with water wind erosion exposing the red sedimentary layers below and forming the brightly coloured cliffs on its edge. In the clear air, this was the unique and amazing landscape on an absolutely massive scale. Closer to the north side of the cliffs, a forest of saxual trees covered low sandy hills. The saxual tree is the main Gobi tree which has a 5-10 meter deep root. The root acquires water from underground.

In early 1920’s American Central Asiatic Expedition searched the ancestor of human in Bayanzag. But they suddenly stumbled across fossil bones, group of dinosaur’s skeleton, eggshell. Dinosaur eggs were discovered from Gobi desert very first time in Bayanzag, which makes this untamed place known in the world in 1923. Soviet Union’s closed border from 1924 to 1990 and sparsely population kept the region still untamed and pristine.